Two years ago, our tiny island home of New Zealand pulled up the drawbridge and closed its borders to keep out COVID. It worked except for a few incursions before giving up entirely earlier this summer. We had nearly two years of no masks and no rules, barring the fact that we virtually couldn’t leave the country and be able to return, nor could kiwis overseas come home for years. Quite a big “but” if you ask me, but I’ll save that rant for another time.

Another side effect would be the total annihilation of New Zealand’s tourist industry overnight.

Almost entirely dependent on international tourists and their billions of dollars, in an instant, “poof” that disappeared. My work, along with tens of thousands of others, evaporated, leaving us very much in the lurch. With the staggered border reopenings, we can begin to see a faint light at the end of the tunnel. But this isn’t an overnight fix. I’m curious to see how our reemergence into the world of the living plays out. 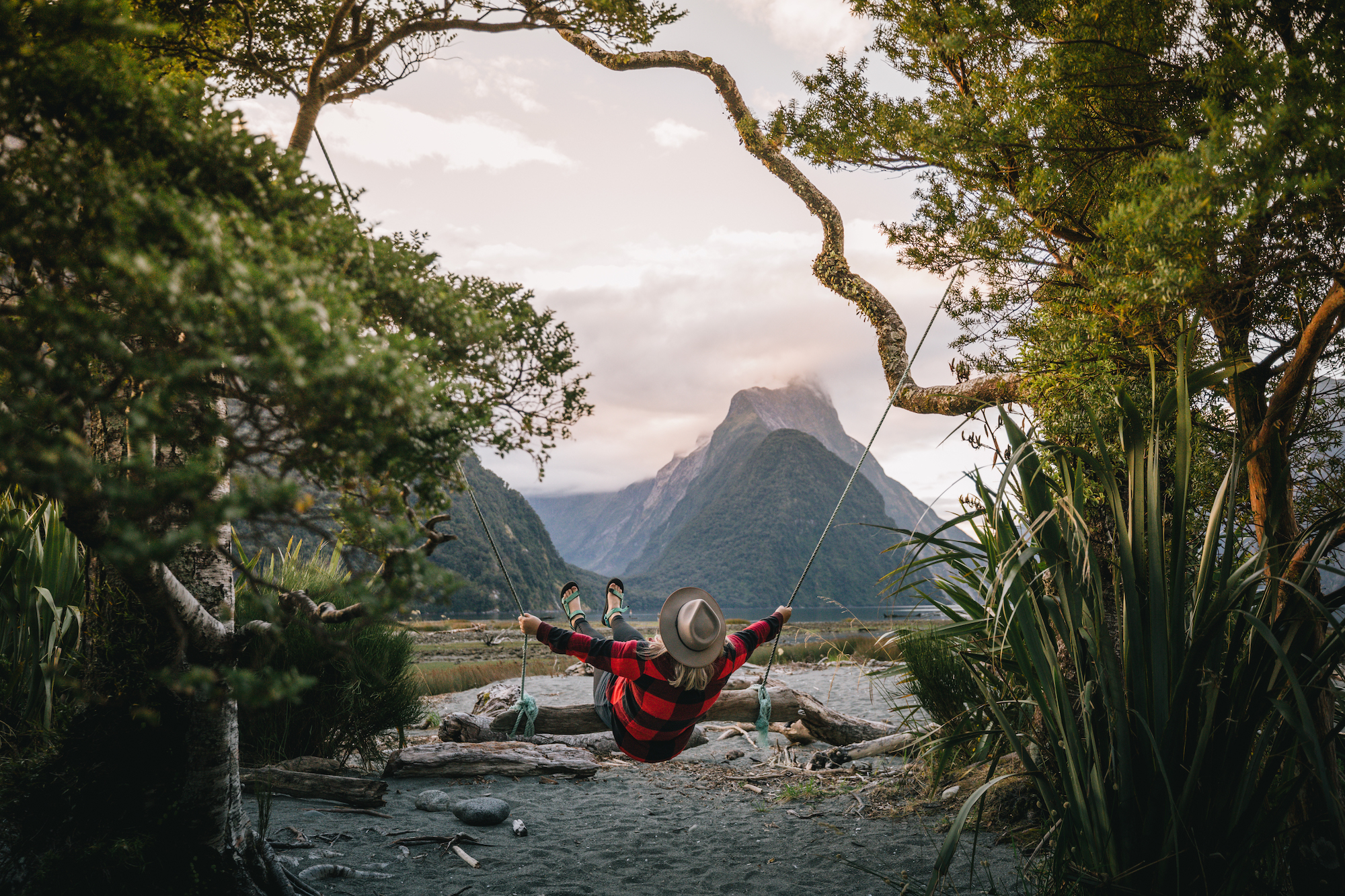 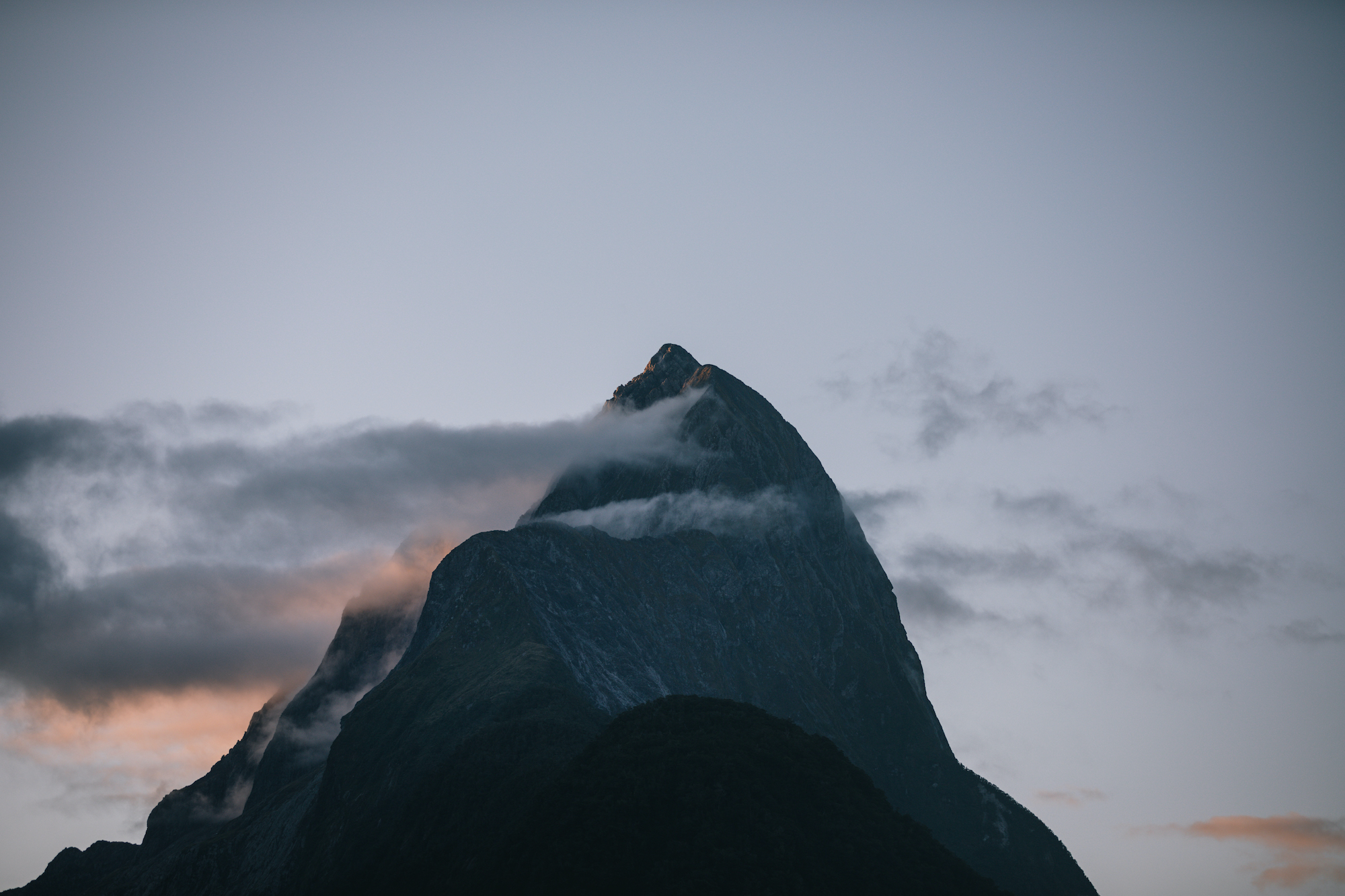 One of the plus sides (if you can call it a plus side) is that kiwis once again ruled the land.

Over 90% of tourism disappeared with the border closure, which meant we had our country to ourselves. I’m going to be honest here; it was actually kind of nice. Plus, we had no control over it, so we had to make the most of the cards we were dealt. It was awful to watch so many businesses struggle or go under, mine included, but at the same time, how cool was it to have all of these wildly popular places all to ourselves?

Listen, now New Zealand was nothing like Paris or NYC, but the growth was still noticeable. The end of 2019 was nothing short of pandemonium in New Zealand, and tourism was increasing at an unsustainable rate, creating a lot of conflicts between locals, wildlife, and nature. The attitude of “well, the tourists pay the bills so they can do whatever they like” was widespread. Nearly 4 million visitors crossed our shores (in a country whose population is 4.9 million) and spent over $17 billion, very little of which trickled into tourism infrastructure or local support. 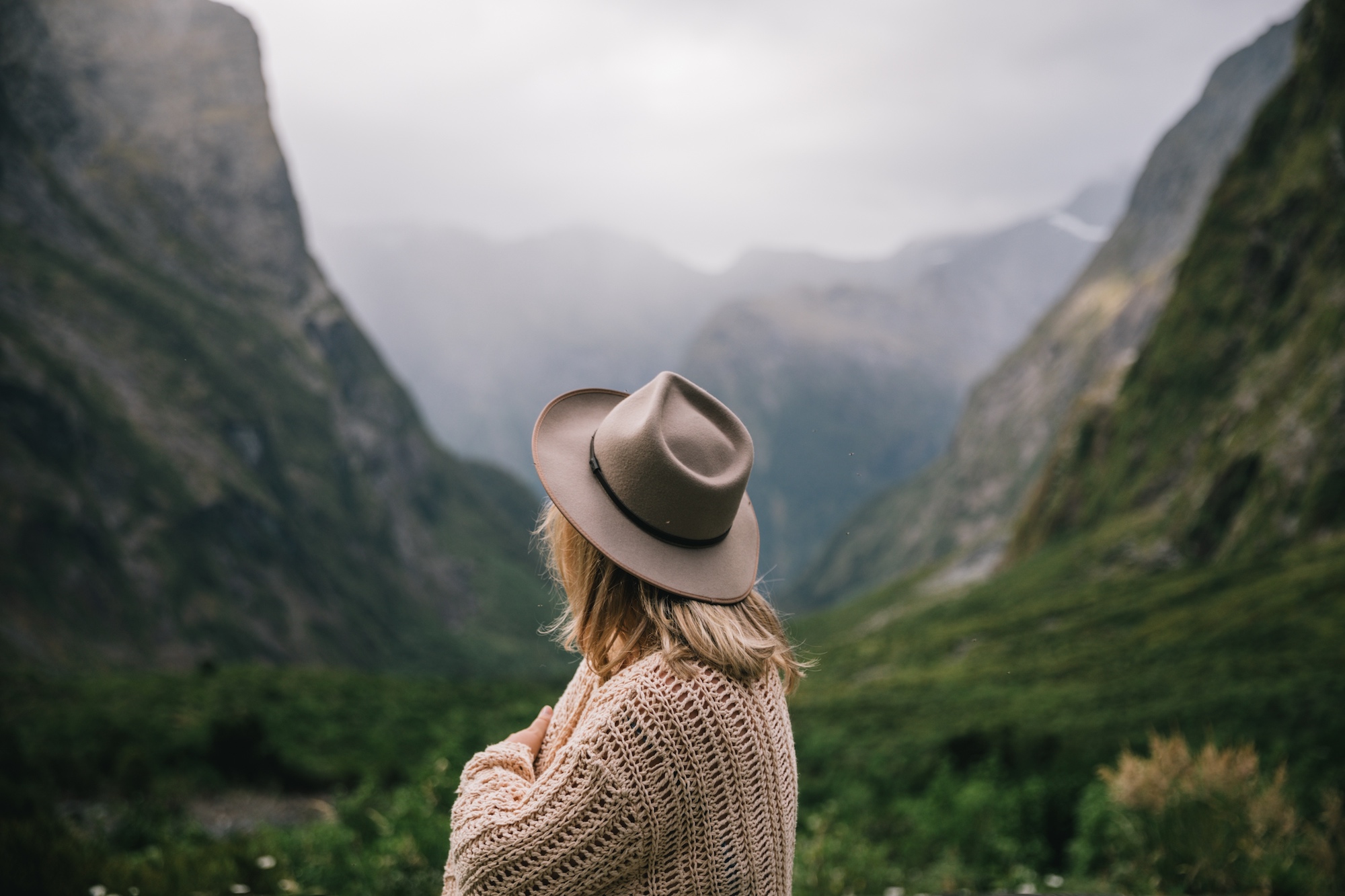 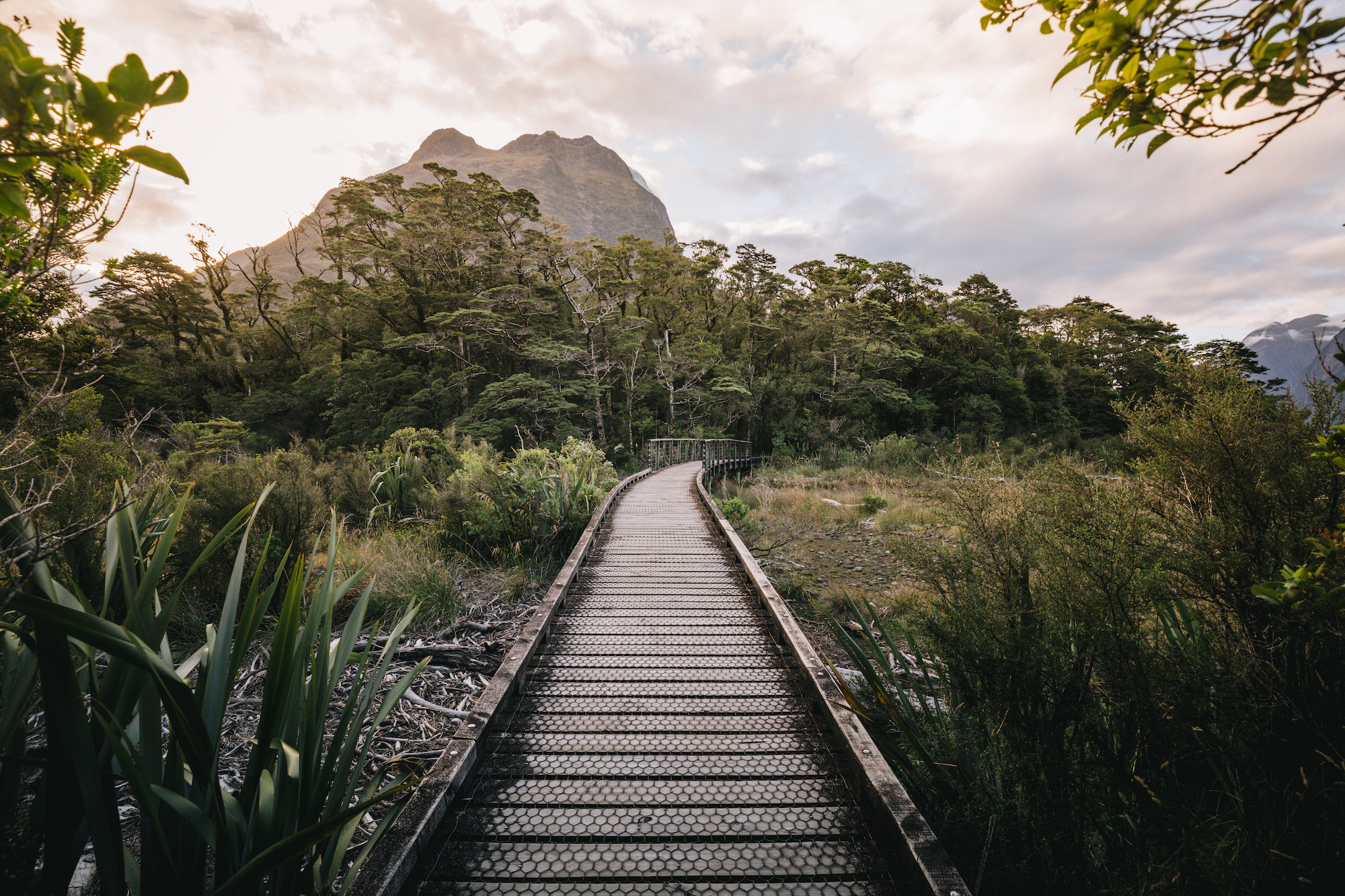 I’ve been in the unique position of watching the growth of tourism in New Zealand for over a decade and watching it crumble down overnight. New Zealand was back in the hands of New Zealanders.

I was determined to make the most of an empty backyard and support as many tourism businesses as possible. The struggle isn’t over, and if you are here, you can still take advantage of the quiet times to experience the best of the best. And what place tops the list of the most beautiful and iconic corners of Aotearoa? Milford Sound, of course.

Very much the hub of New Zealand’s largest national park, Fiordland, Milford, is the most accessible and most visited spot in the park, hitting over a million annual visitors just before the pandemic turned off the tap. 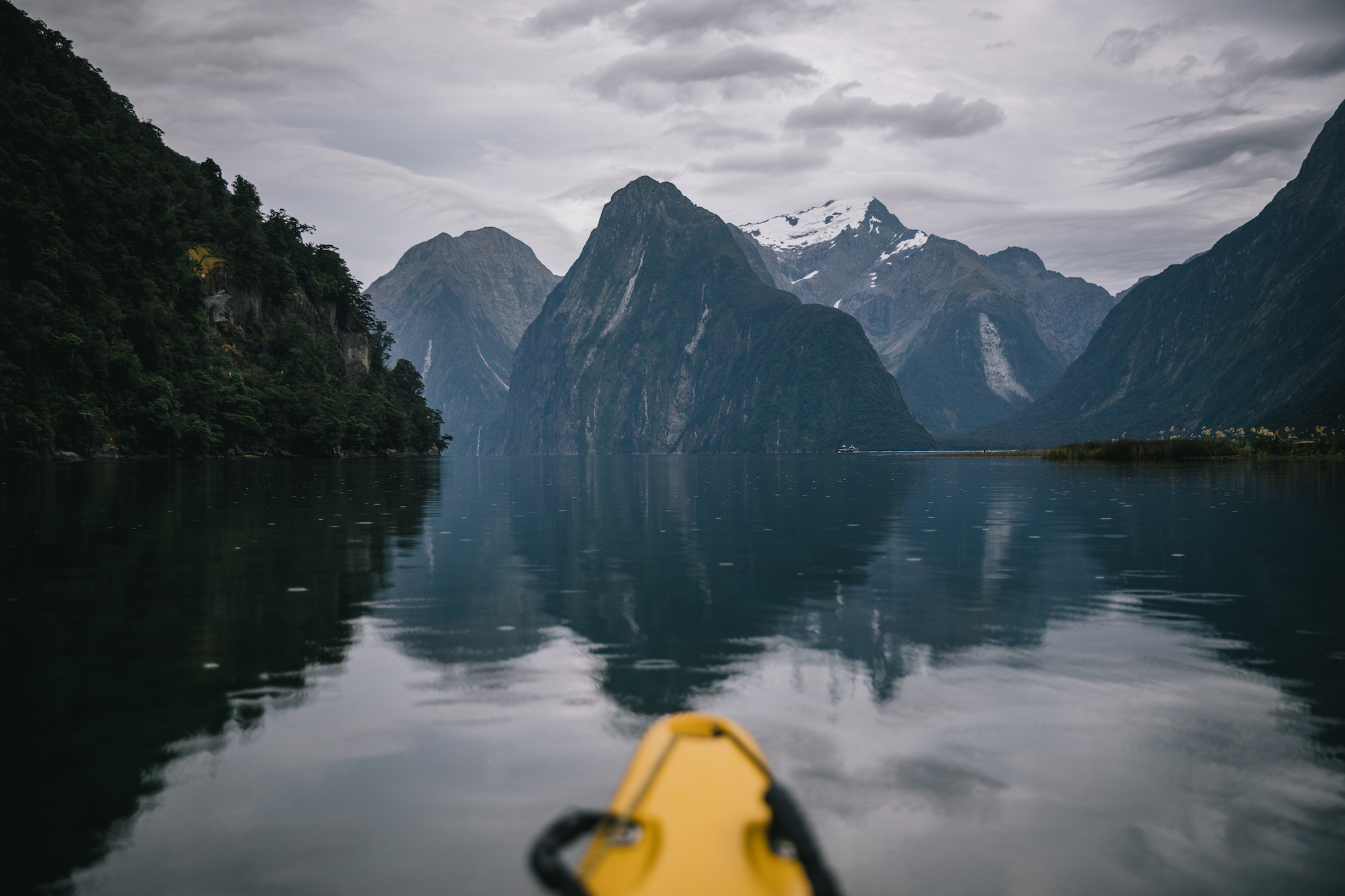 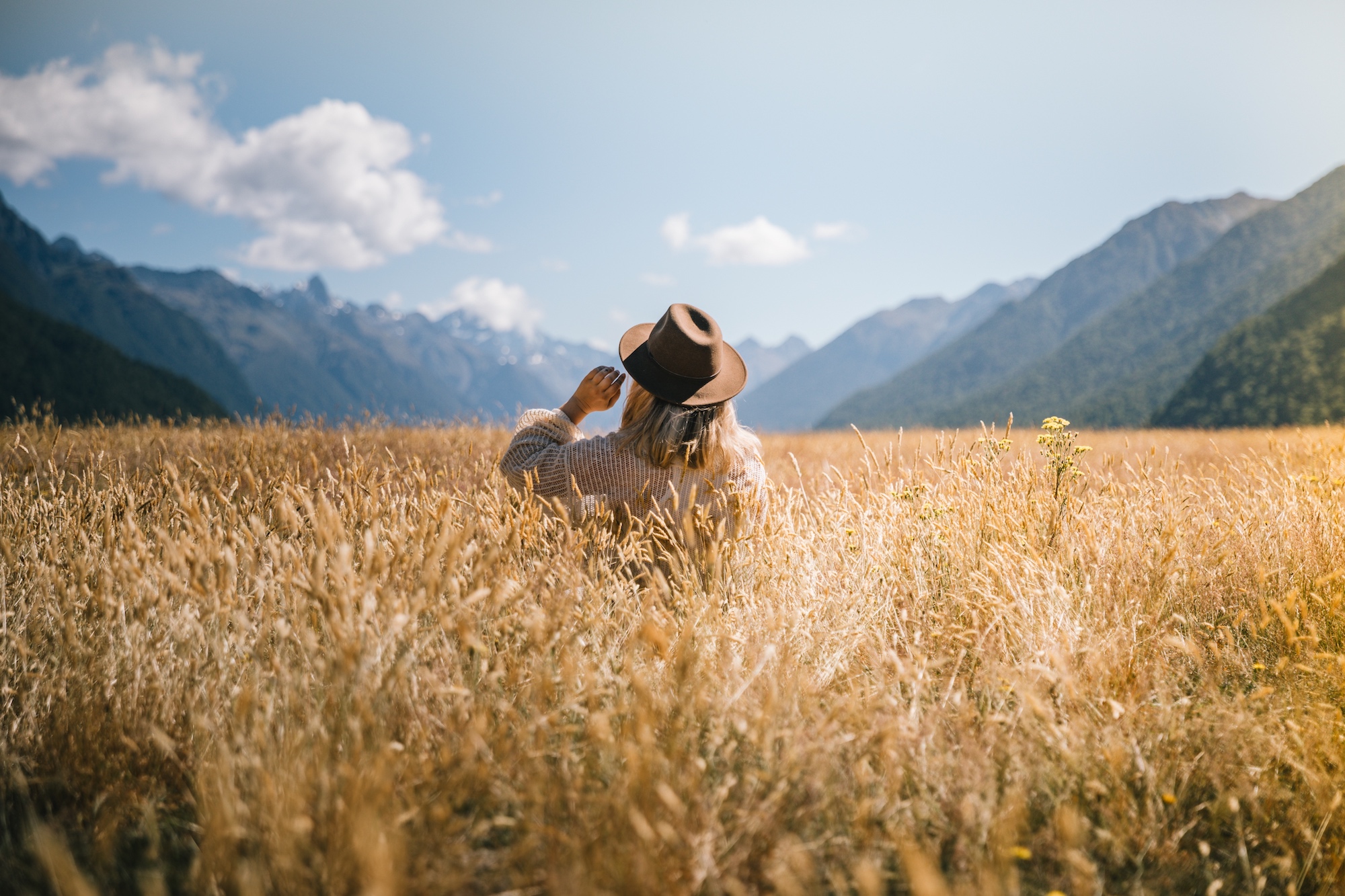 I visit Fiordland and Milford several times a year. I cannot overstate just how magnificent this place is and how I never get tired of coming back. In fact, I actively seek it. Here the wilderness is pure and wild, and you genuinely feel like you’ve stepped back in time.

Milford changes dramatically depending on the seasons and the weather, which means you’re always guaranteed an enigmatic and diverse experience when you visit. It’s also one of those places that only gets more beautiful when it rains. Low clouds hug the cliffs crafting a magical feeling. Hundreds of temporary waterfalls cascade down from the mountains, making you feel like you’ve somehow woken up in Jurassic Park.

Except now there’s 5G in Milford, which is the hot controversy among locals. As soon as you left Te Anau, there was no phone reception all the way to Milford and in Milford itself, which in a way, made it even more special. Not anymore!

25 photos that will inspire you to visit Fiordland 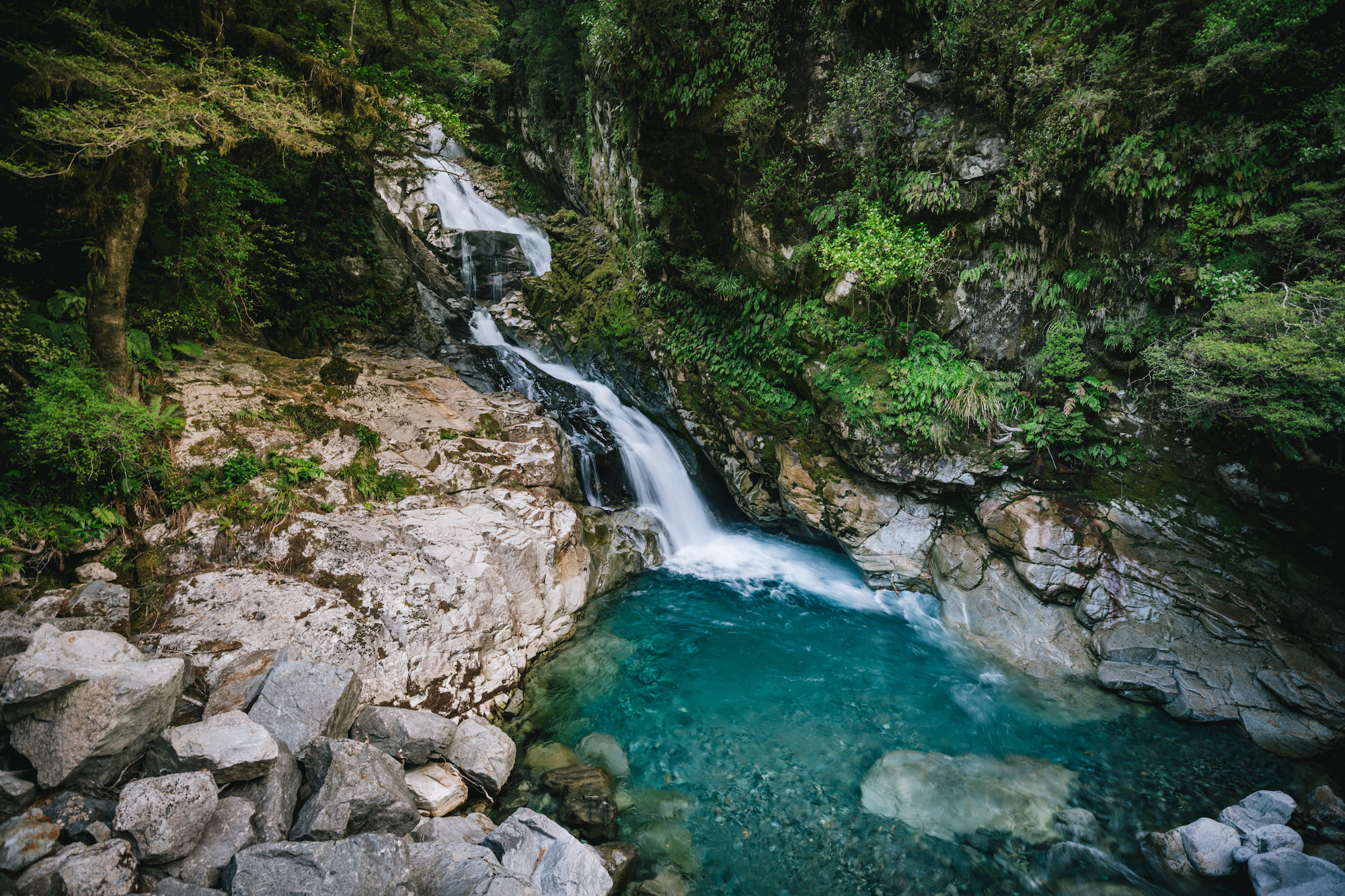 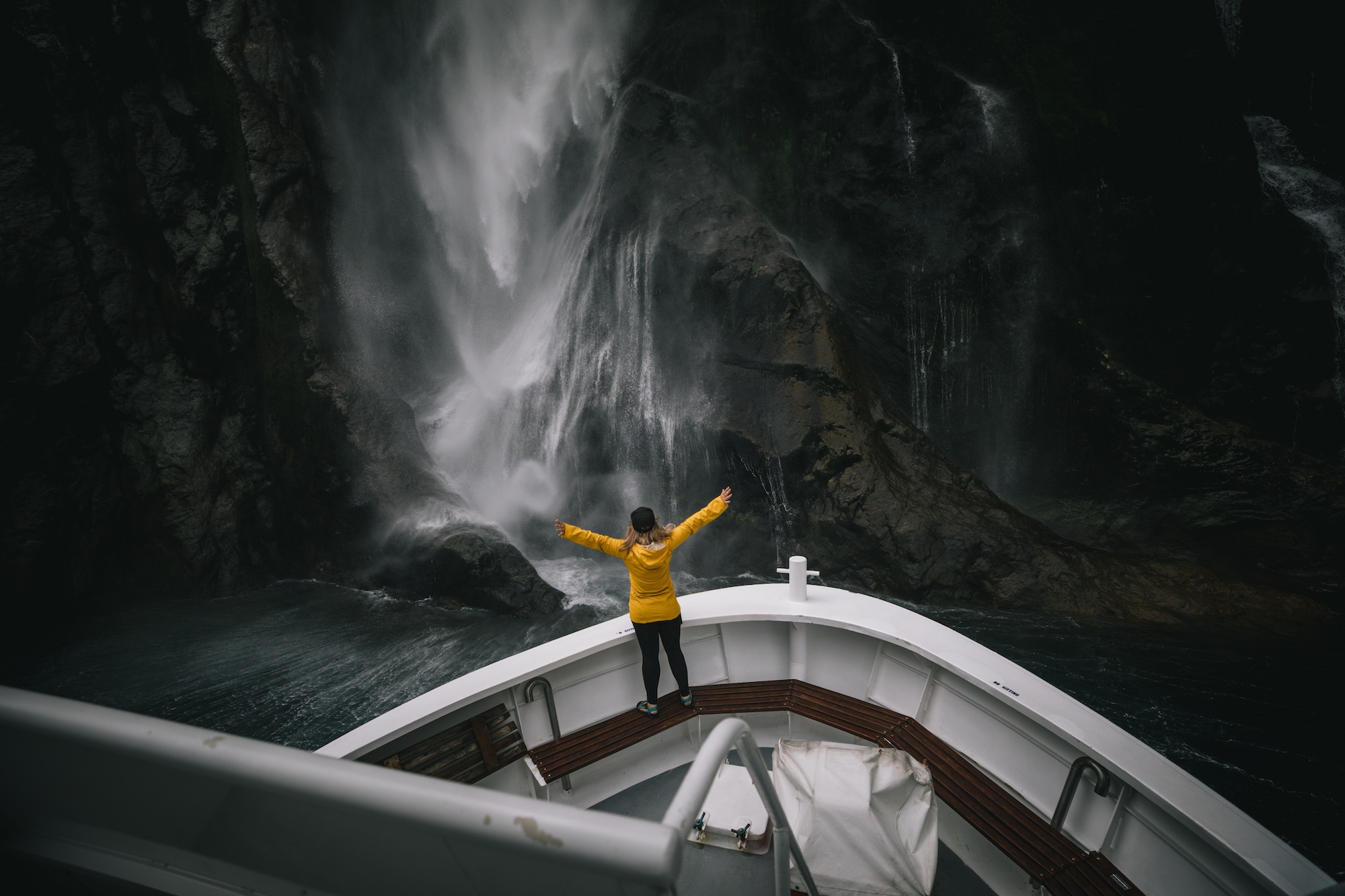 One of the wonderful things about Fiordland is that it’s so big even when there were a lot of tourists, it never felt too crowded. There’s plenty of room to spread your legs (COVID-19 Response Minister Chris Hipkins’ slip of the tongue never ceases to amuse).

With the borders reopened, tourists are beginning to trickle back to our beloved shores, though I believe it will take a long time, if ever, to return to what it once was. With this new future within sight, I can’t help but reflect on how happy I am to have taken advantage of soaking up all of New Zealand during our forced isolation from the world.

And nothing sits more predominantly in my mind as when I had Milford Sound all to myself in January. A place I’ve been to so many times in so many circumstances yet hadn’t seen it like this ever before. And trust me, guys, it won’t stay this way much longer. 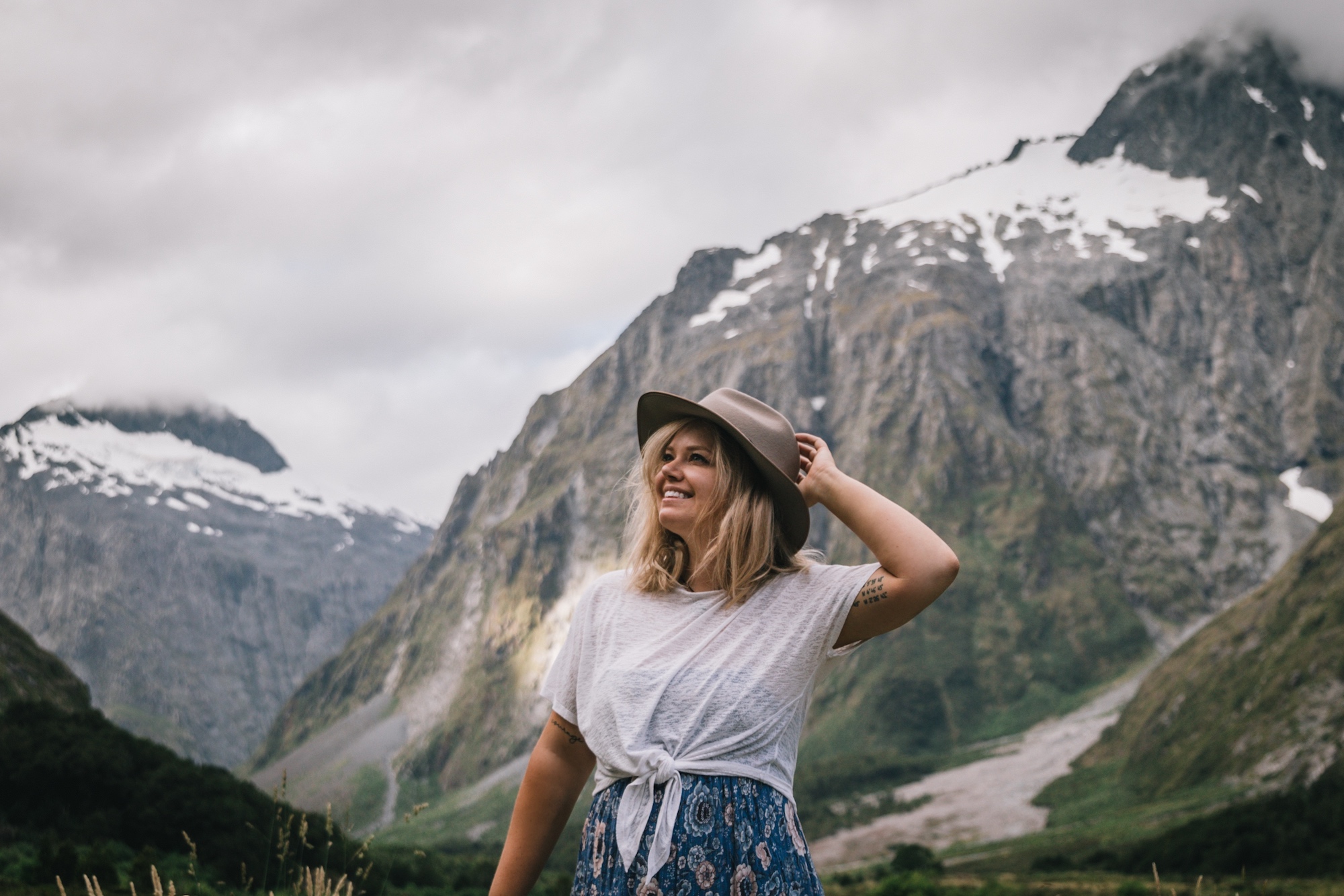 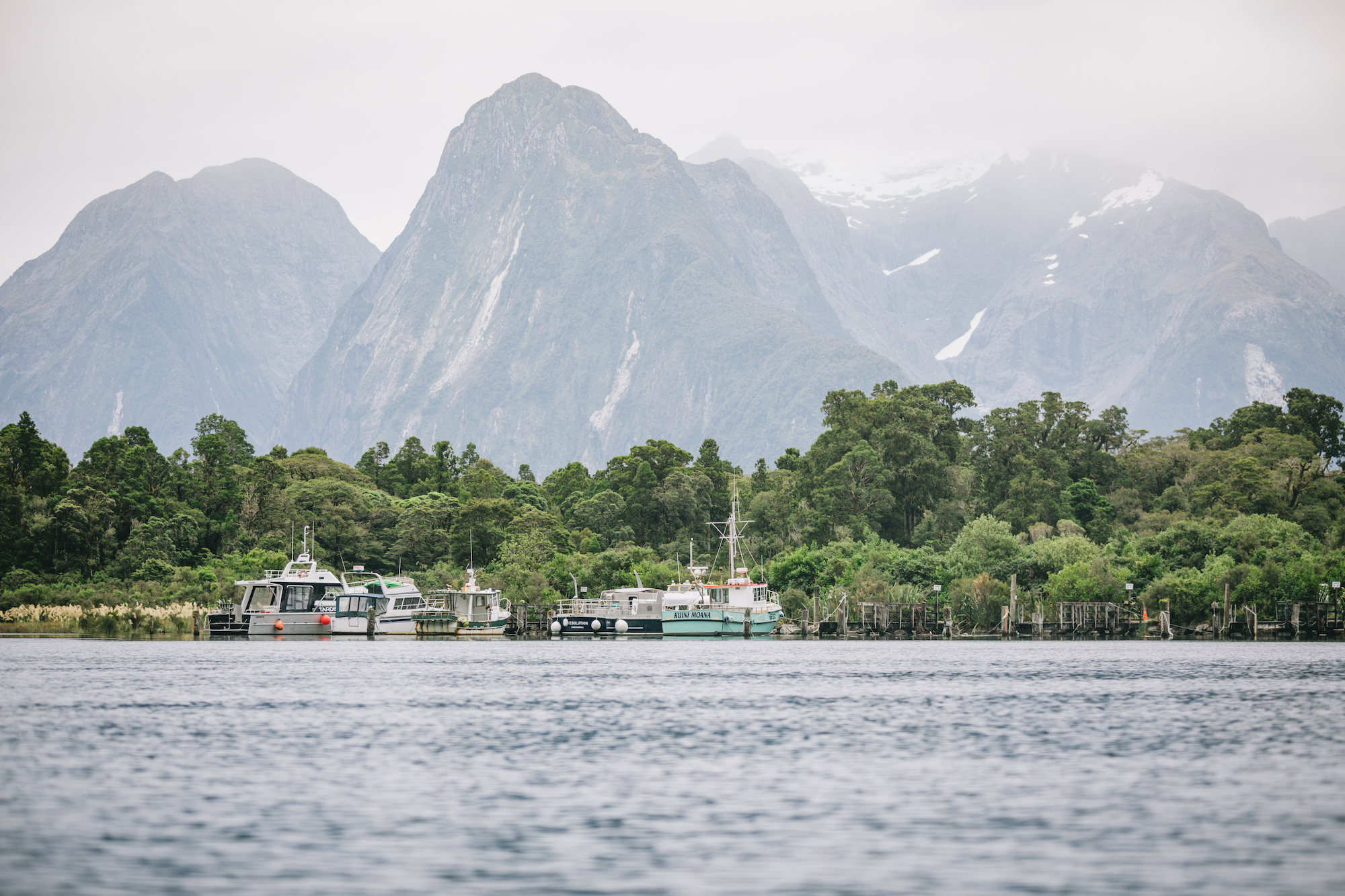 A gentle reminder that summer in New Zealand runs from December to February, which coincides with our busiest tourist season. This January was one of the best summers I can ever remember here. We went six weeks without rain down south in the mountains. Fiordland started to go a bit brown, and the waterfalls dried up – it was bizarre to see!

Typically Fiordland receives the most rainfall in New Zealand. Here it is generally damp and misty and a level of green that almost seems fake. It seems that anything standing still is covered in layers of moss. As I walked the beech forests and used trees and roots to haul myself up mountains, the moss had gone dry beneath my fingers. Bizarre to see, it also meant that every day was perfect weather!

Also, there were hardly any tourists. It was so quiet. January would generally be one of the busiest times of year in Milford Sound. This time, I had it all to myself. 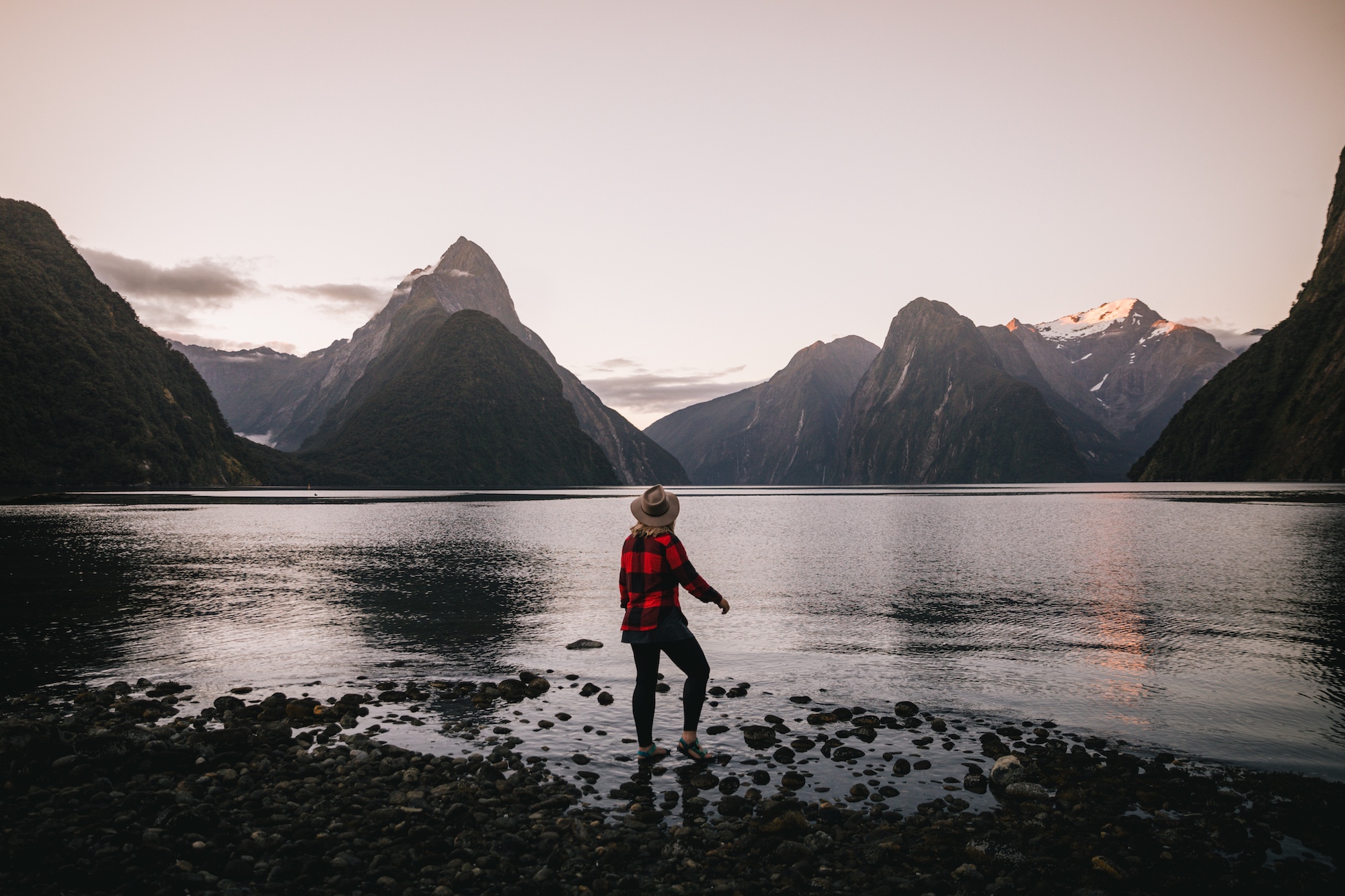 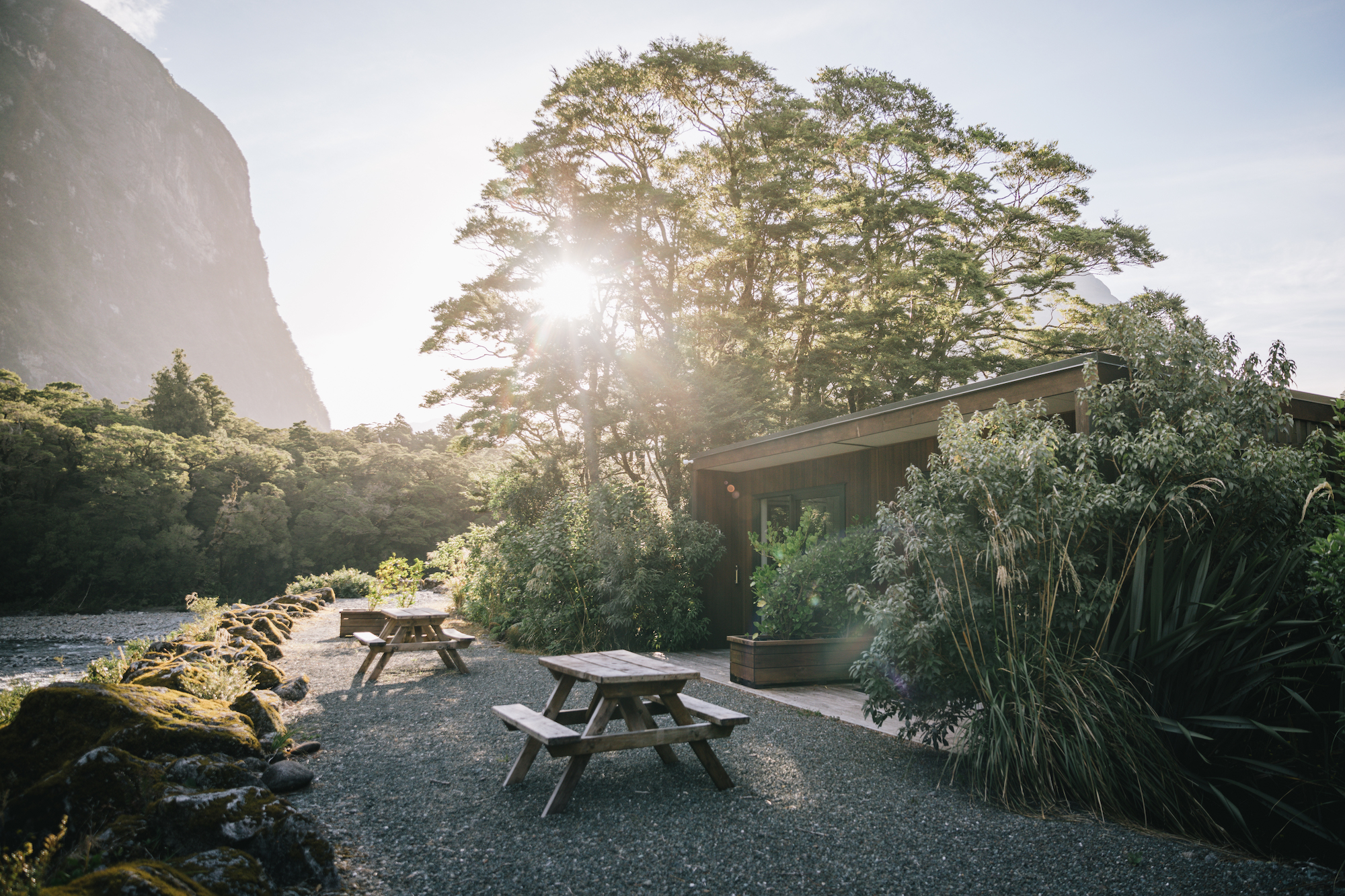 No matter who asks me, I will always recommend that you spend a night or two in Milford Sound itself. An extraordinary place, even when the sun goes down, its immensity demands more than a day trip. Book in early at the iconic Milford Sound Lodge in one of their river chalets. Peaceful and beautifully situated, you might not even want to leave the room!

So much love and hard yards have gone into making the lodge incredible! I can still remember camping here before and after finishing the Milford Track. Almost a decade ago, it was more of a backpackers. The delicious nachos I ordered once I finished hiking remain very high in my memory! I am happy to report they’re still on the lunch menu!

Once international tourists return, the lodge books up quickly as it’s one of the only places to stay in Milford Sound, so take advantage now while it’s still quiet. 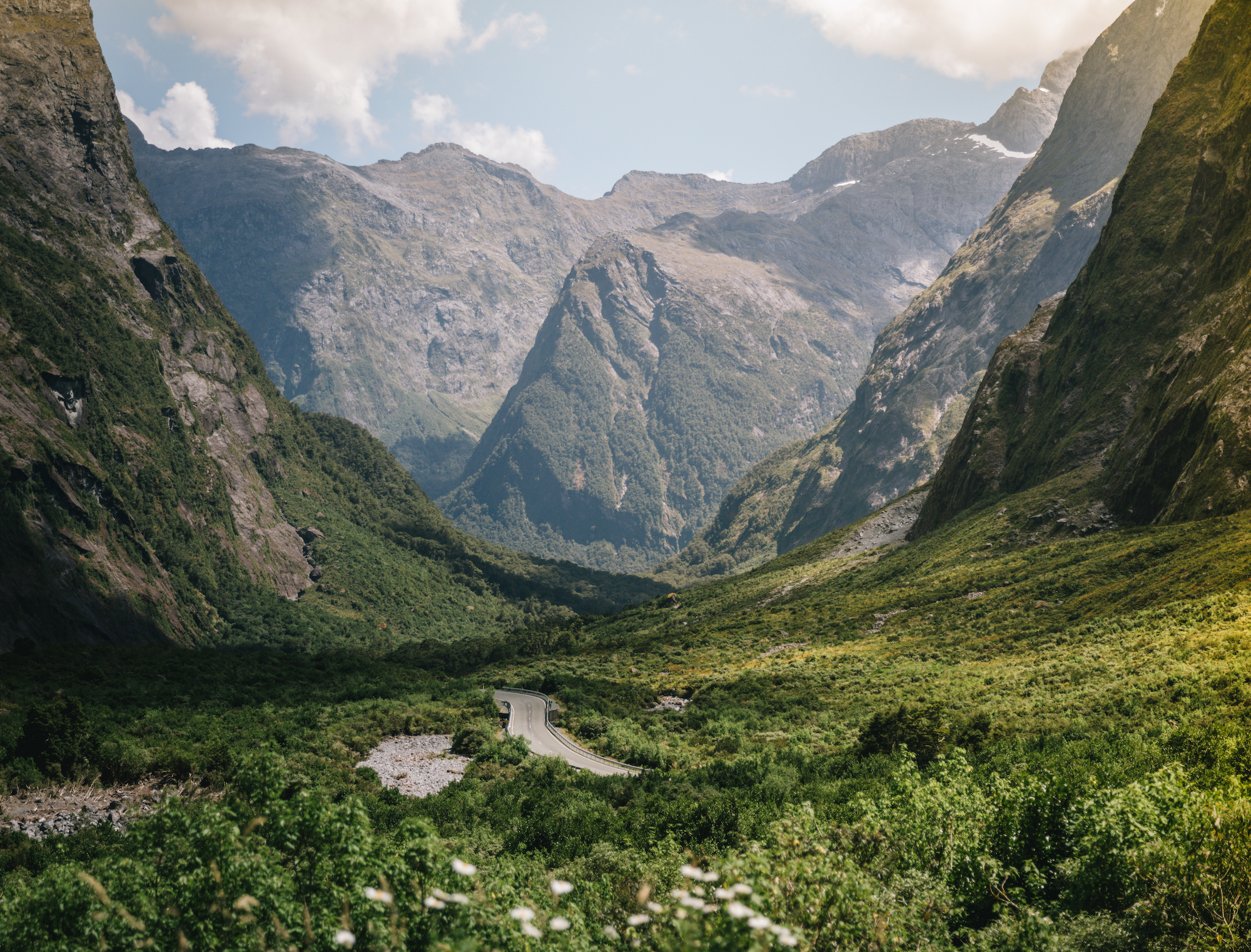 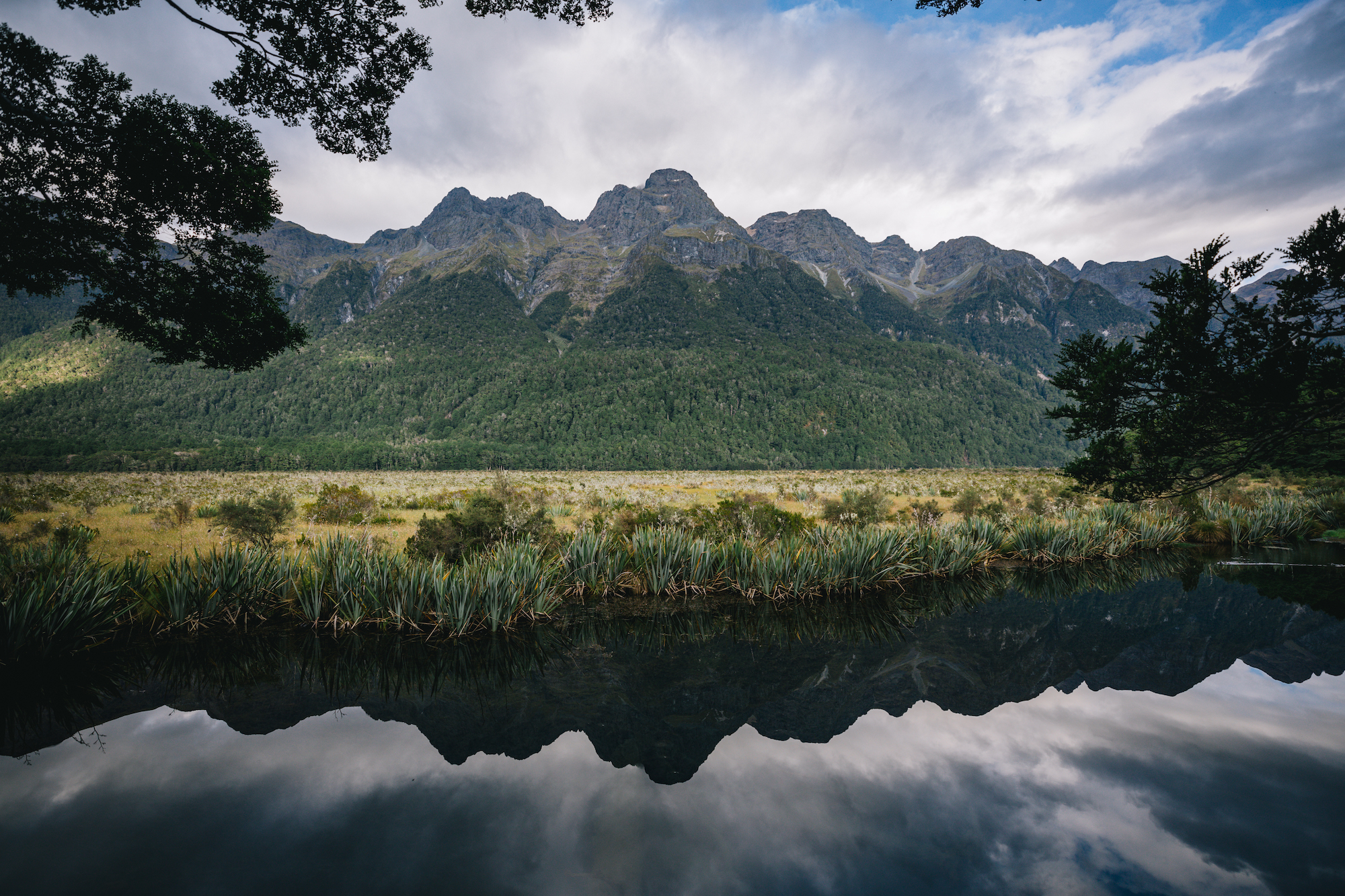 Another reason it’s worth your while to slow down and take your time exploring Milford now is to have the iconic Milford Road all to yourself!

Since, in the past, there were tour buses coming through every day, sometimes the sites would be busy for chunks of time – though I found it easy to wait a while, and you’d have it to yourself. Or better yet, do the tourists stops in the afternoon once the buses are gone!

Places like the Mirror Lakes, Monkey Creek, and the Lake Gunn nature walk are quiet except for the birds. 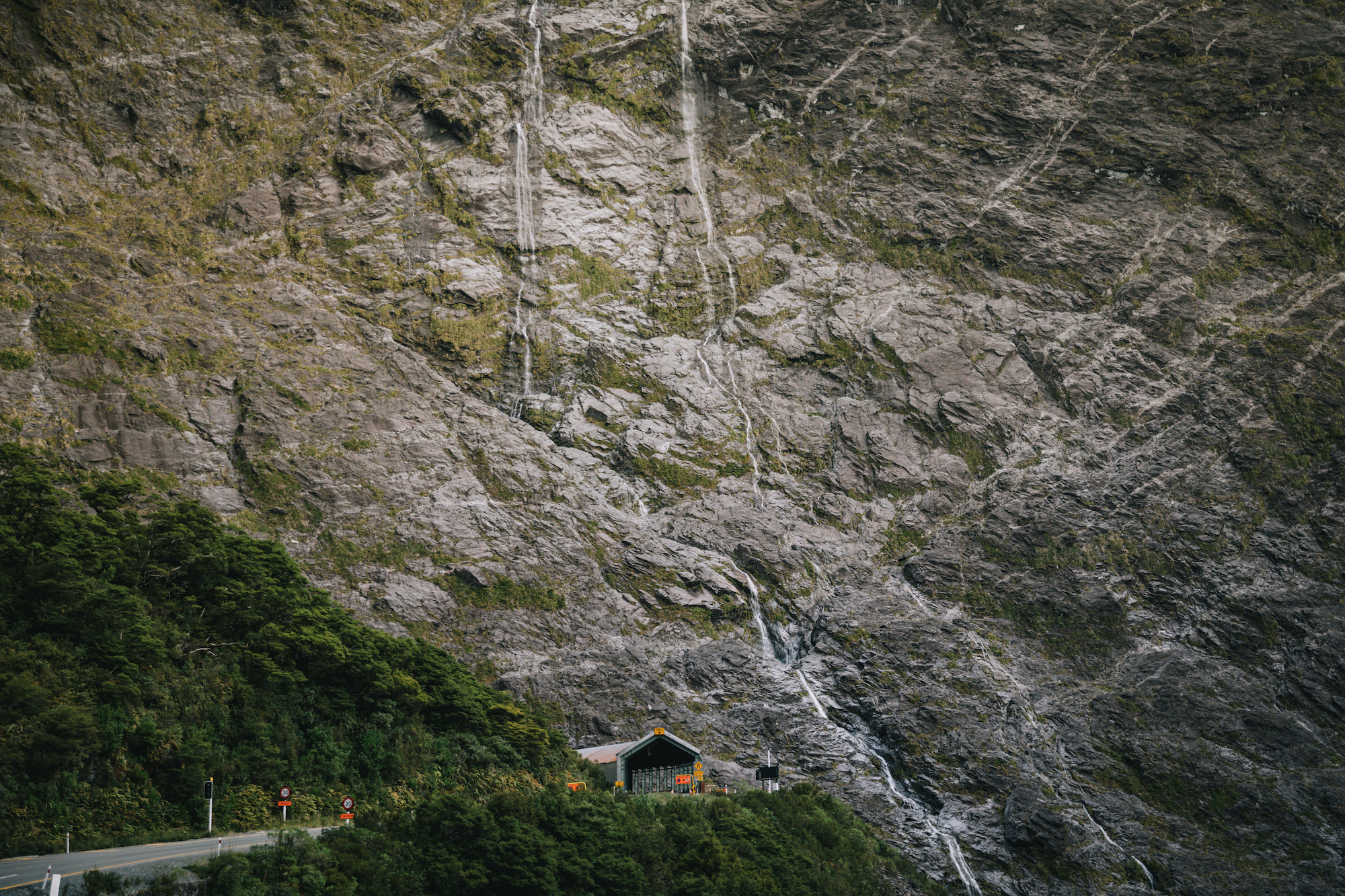 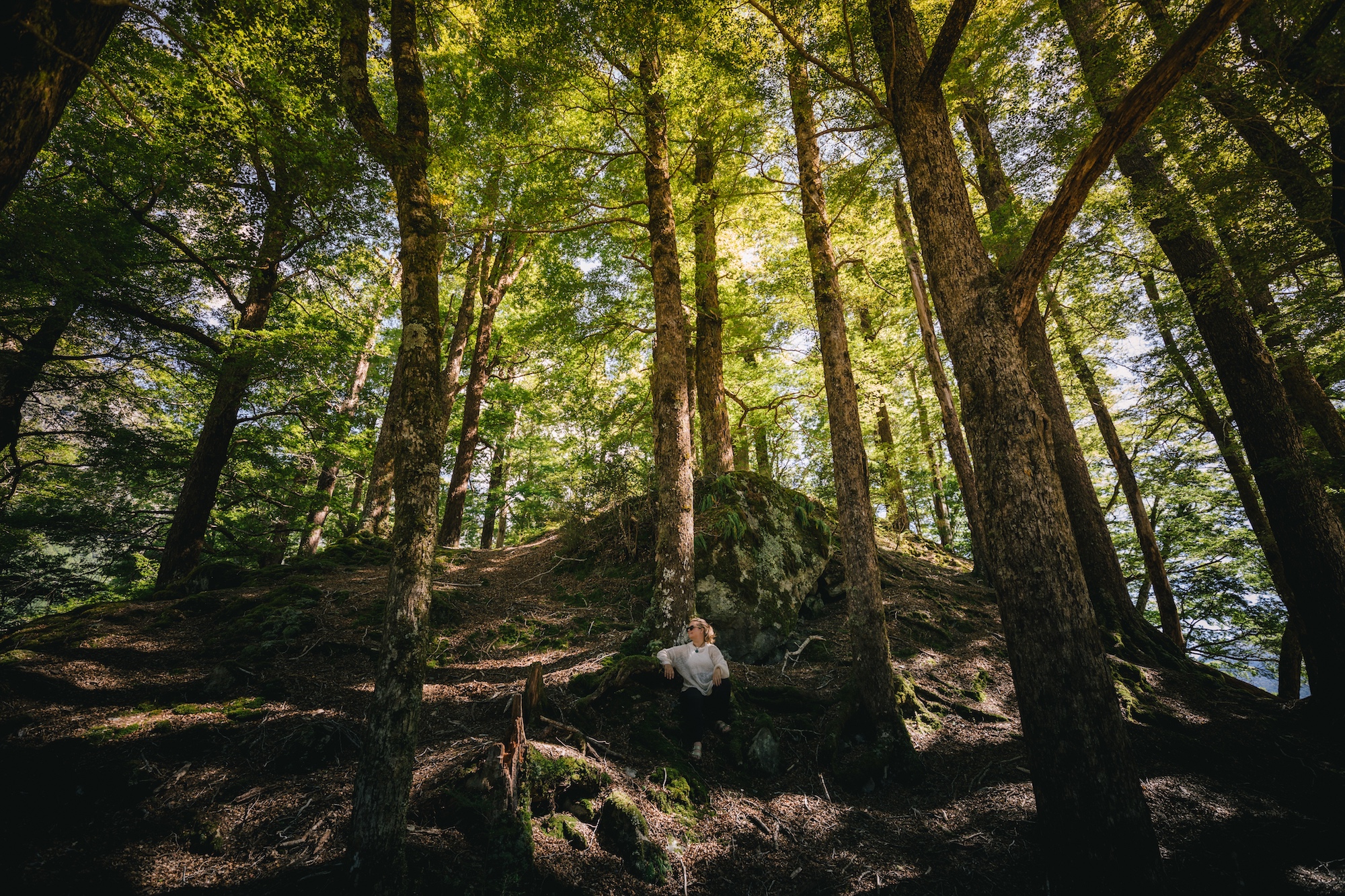 I had an exciting first for me on this trip. Thanks to the perfect bluebird days in the summer, I finally saw my first BASE jumper in Milford! You know, those bold, dare I say, crazy folk who jump off cliffs, free-falling until they release a parachute. I’d heard Fiordland was a popular spot for BASE jumping, thanks to its perfectly steep, vertical mountain faces, but I had yet to see it!

As I was driving down from the Homer Tunnel towards Milford, I drove past a guy walking down the road. It took a few seconds for my mind to click, but I realized he was wearing an orange wingsuit like a parachute! He must have jumped off the top of the Homer Saddle! Holy shit! Zooming away, I looked for a spot to turn around so I could go back and give him a lift; but he was gone!

Damn! that would have been one hell of a story to hear. 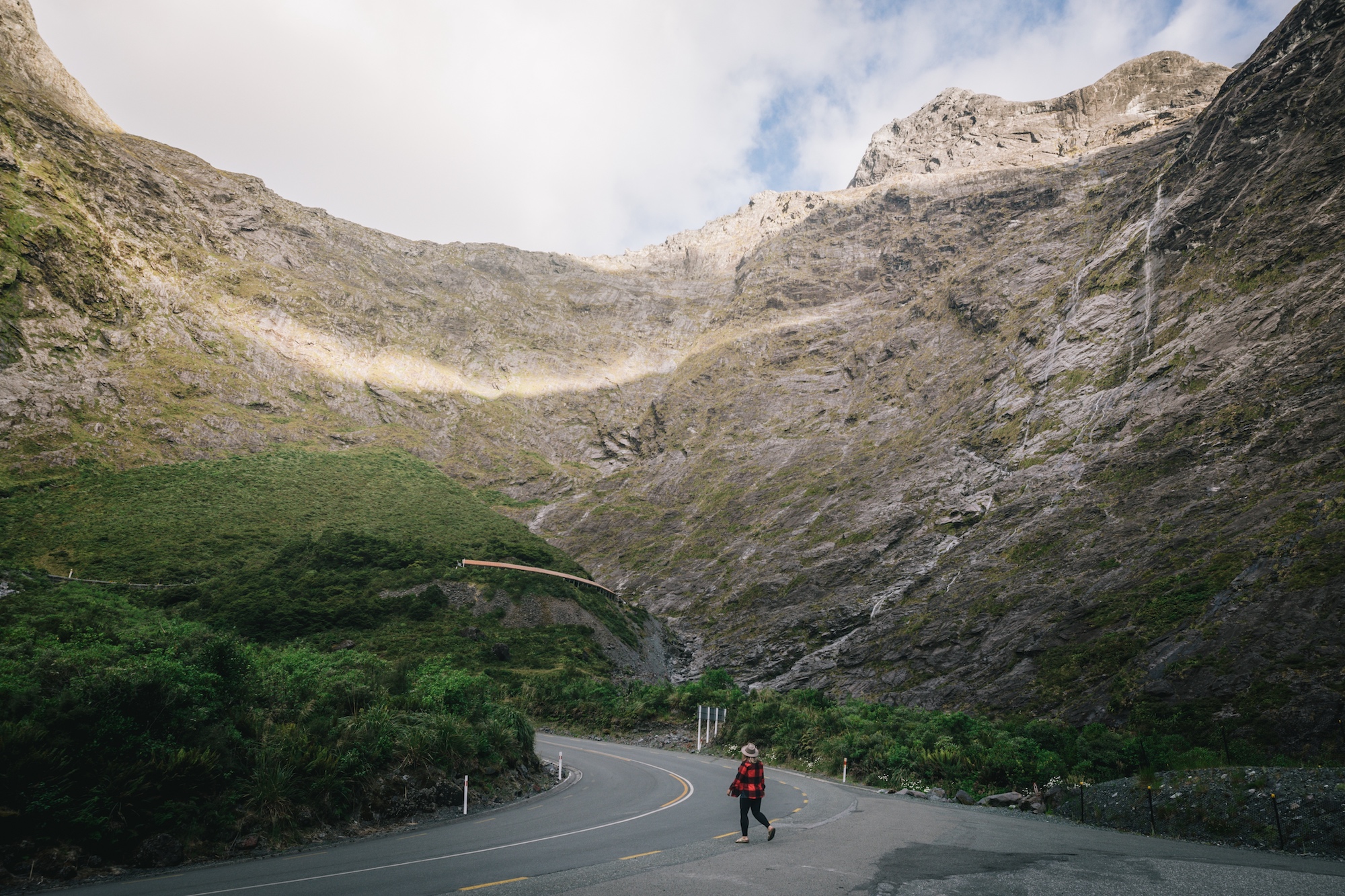 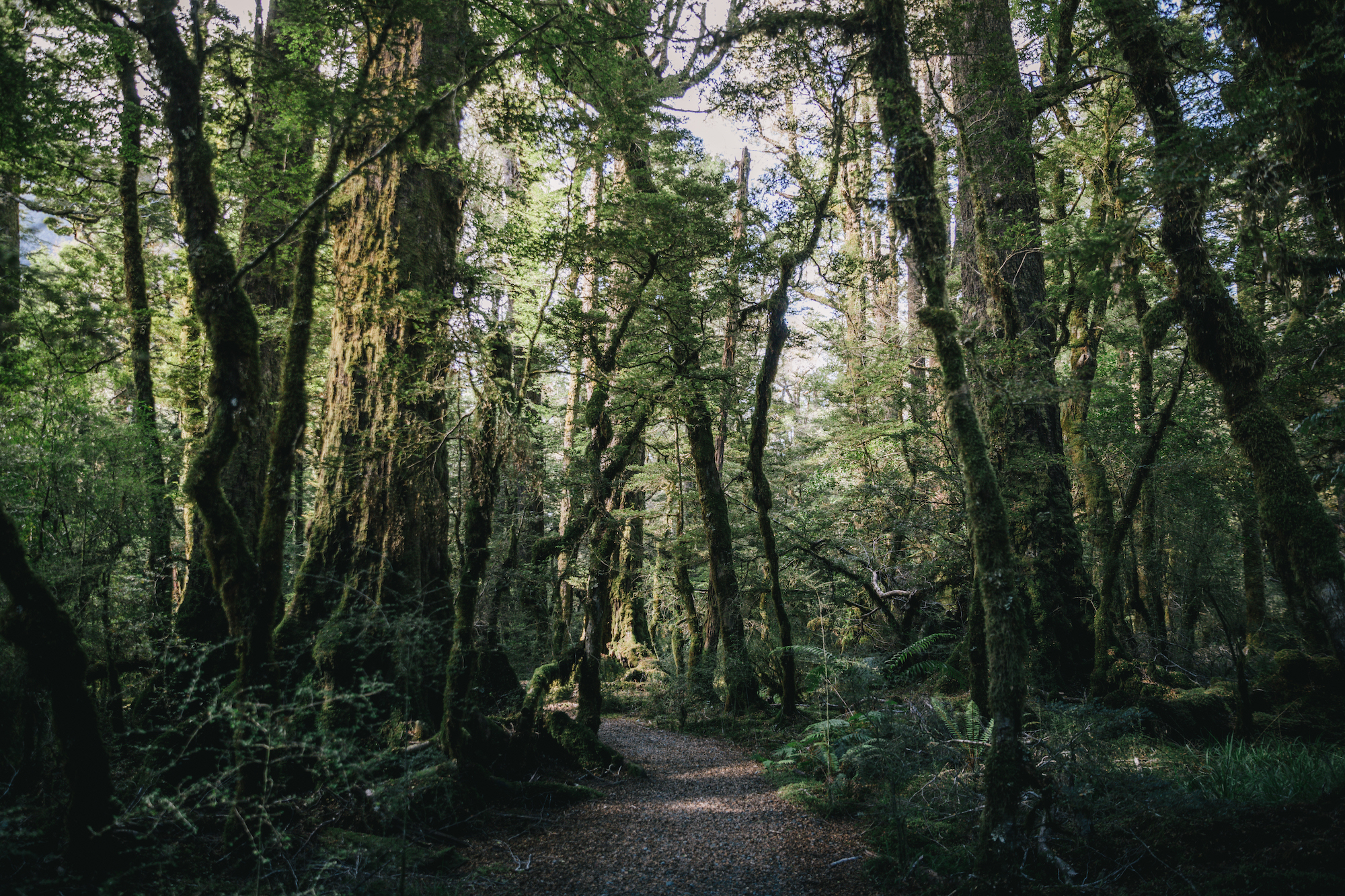 Only a few boats a day go out onto Milford Sound these days. This very much harkens back to the 70s, when things were equally quiet.

I was excited to return to the water by kayak with the iconic team Rosco’s Milford Kayaks, one of the OG adventure businesses in New Zealand. Over the years, I’ve had heaps of friends guide for Rosco’s in Milford. It’s a legendary business, and I was so happy to be back with them after all these years. Especially, since it was a perfectly still Fiordland day!

It’s always an exceptional experience to explore Milford by Kayak. But to be there in the middle of summer, with no one around, with just one boat in the distance, you could get a feel for the magnificence of this place. I cannot understate how special it was for me to have Milford like this all to myself. 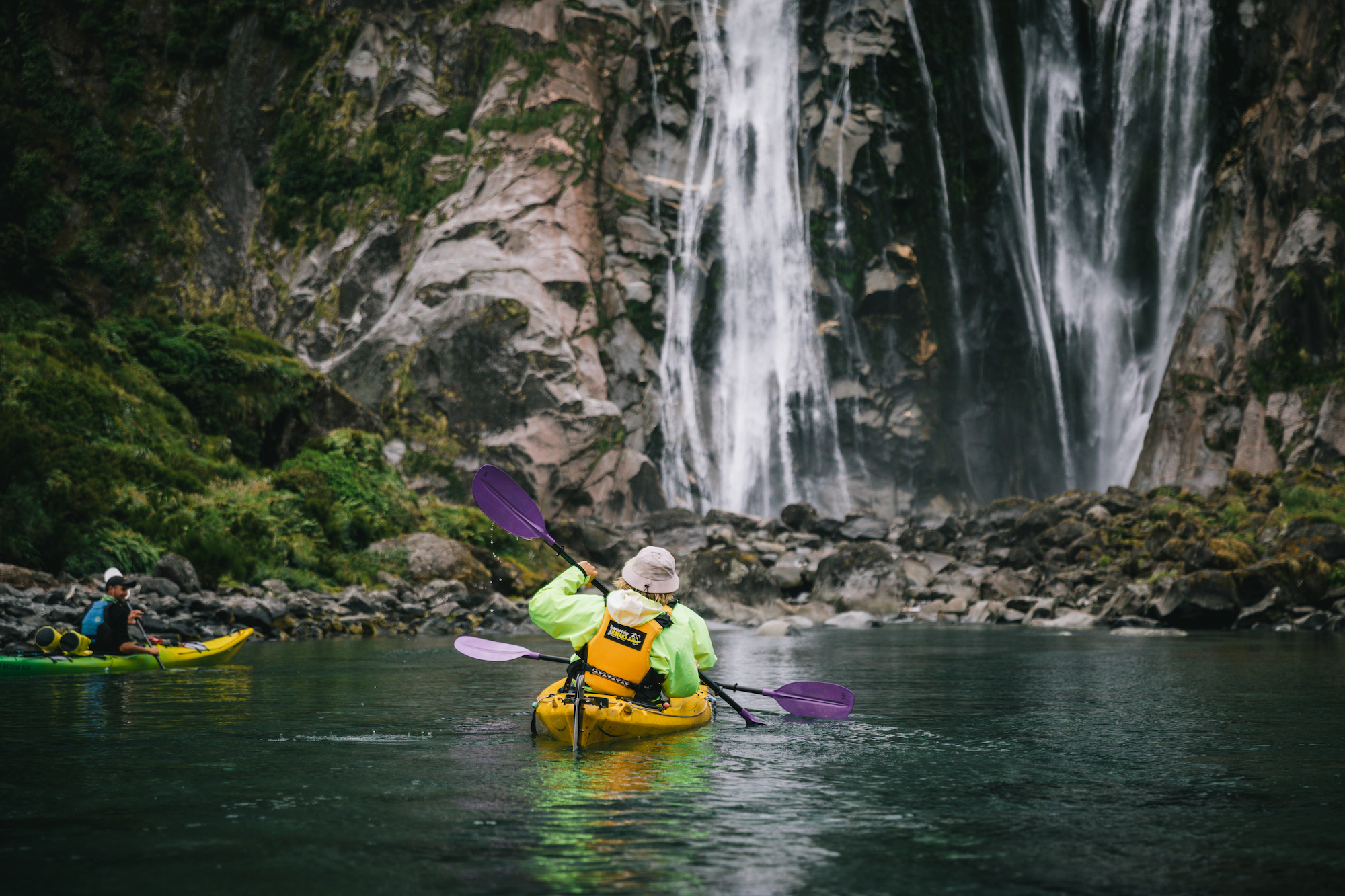 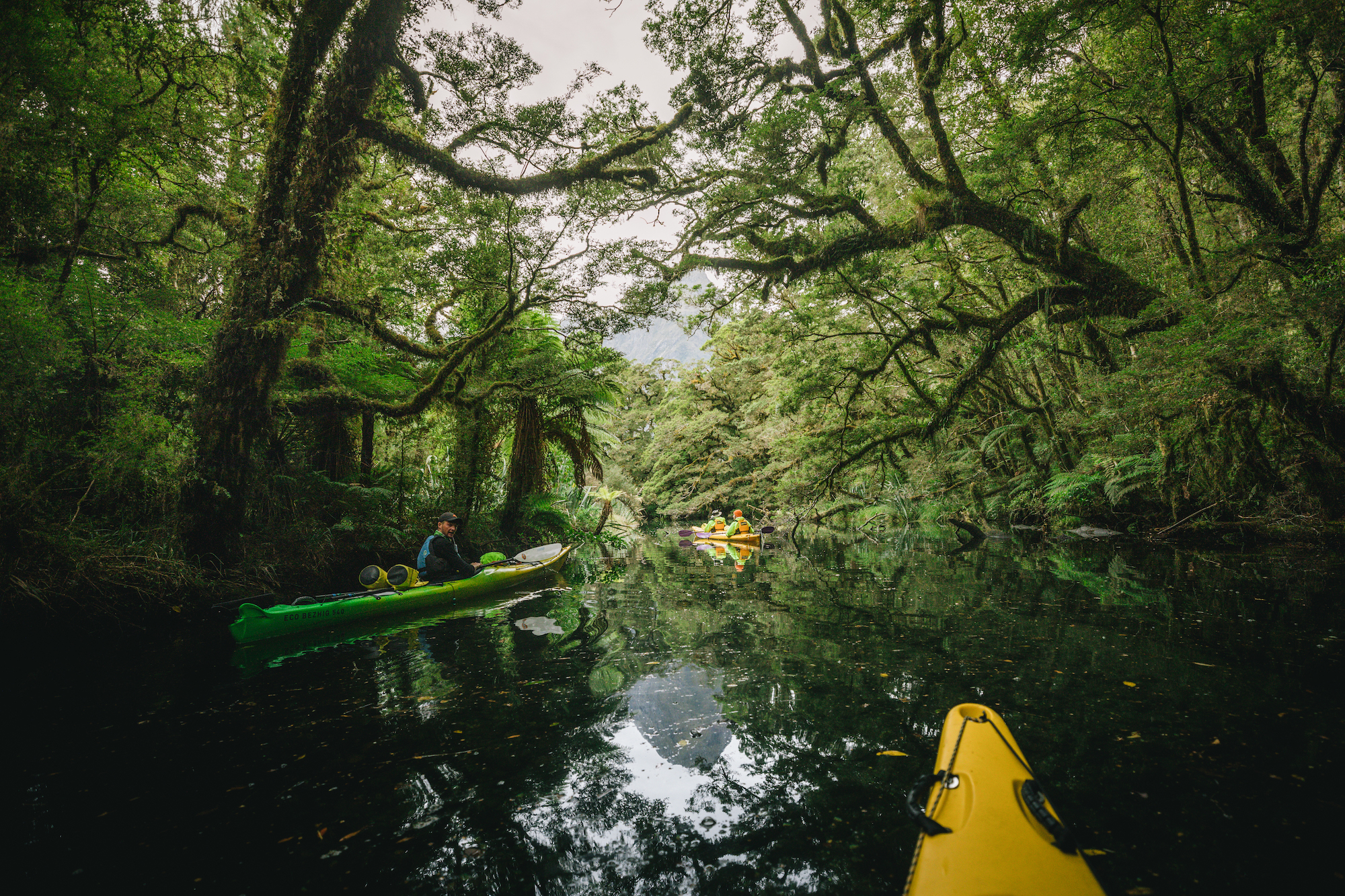 In the afternoon, I returned to Milford on a small boat trip with Cruise Milford. Once again, we had the fiord to ourselves, with just seals and dolphins for company.

It wasn’t long before dusky dolphins began jumping and swimming along the boat’s prow, cutting through the glassy water. Unusual here, it’s more common to catch glimpses of the bottlenose dolphins who call Fiordland’s water home. Summer is another fantastic time to visit Milford because you can see all of the adorable seal pups. Tiny and cute, they dot the rocks and make for a beautiful memory once you glimpse them.

Thanks to the incredibly steep mountains that jut vertically from the fiord, the smaller boats can go right up to the waterfalls, allowing you to get a taste (or a shower) of the glaciers that feed Milford. 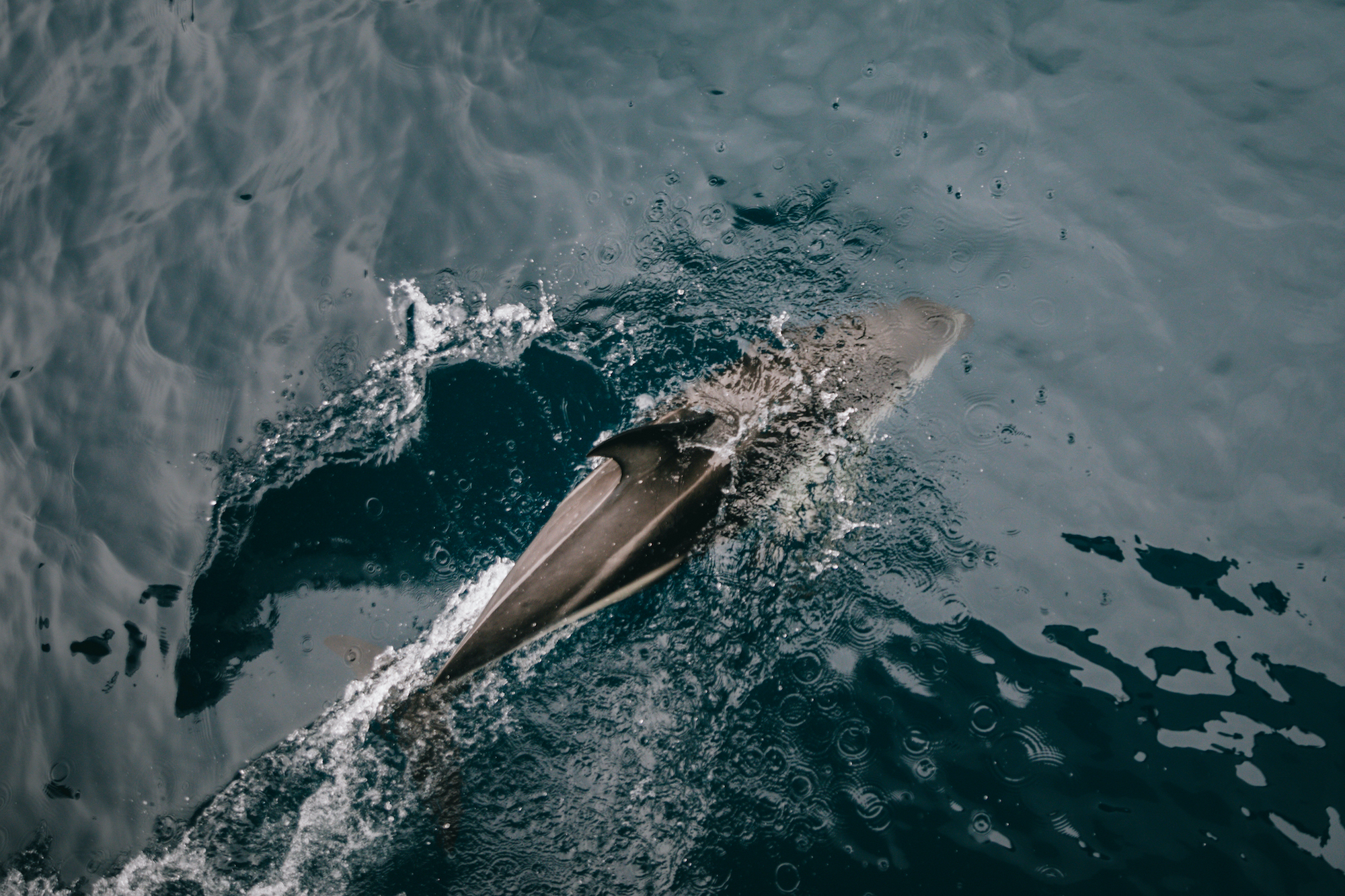 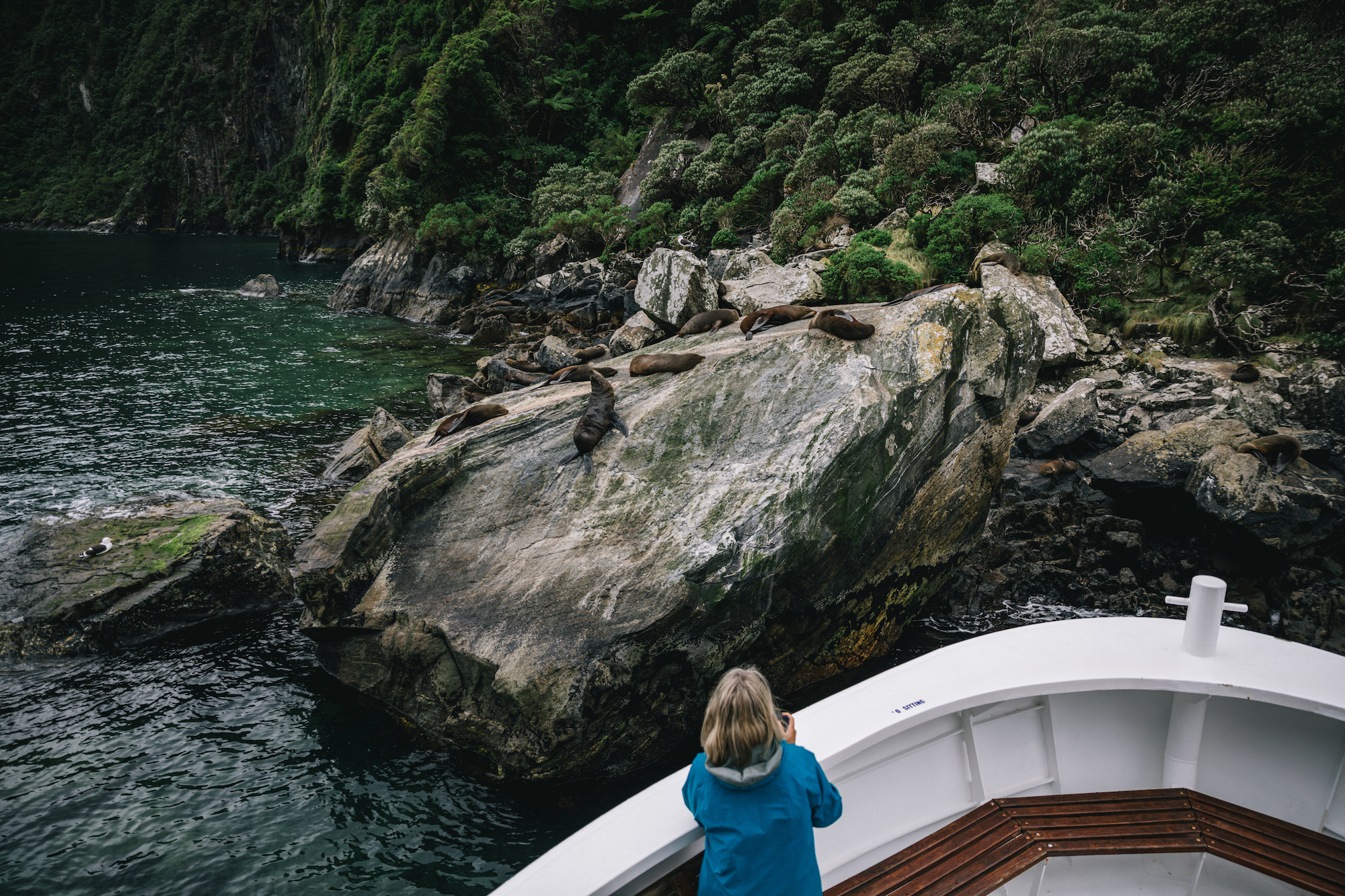 I’ve been so many times, and even as I type this out, I’m looking at my calendar to see when I might be able to sneak back again. There are still walks I want to do, huts to visit, and adventures to be had; I plan to take full advantage while things are quiet. For now.

Have you been to Milford Sound? Have you ever had the experience of visiting a popular place and having it all to yourselves? Share! 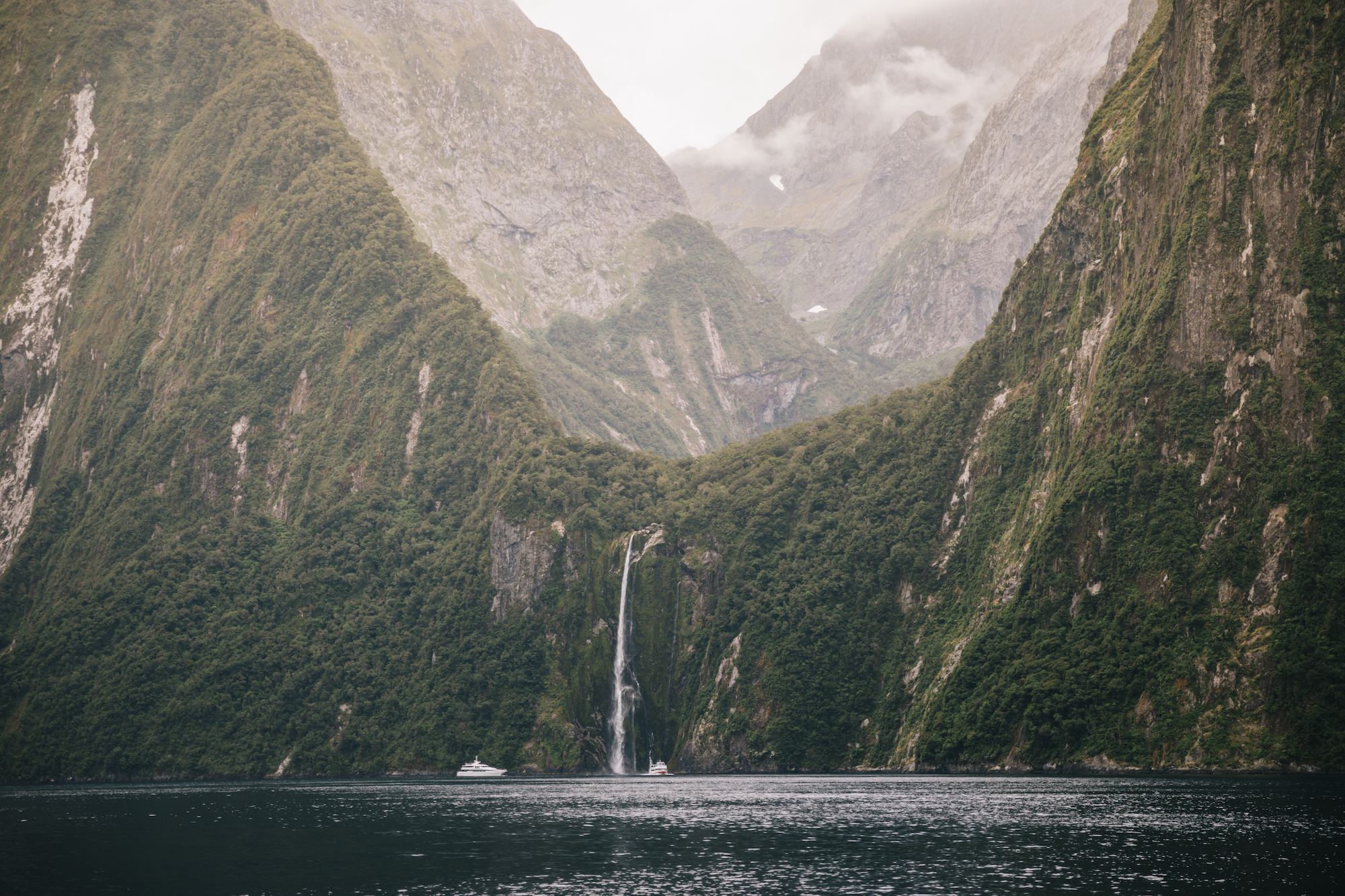 Many thanks to Great South for hosting me in Fiordland; like always, I’m keeping it real – like you could expect less from me!

The post Magic happens when you have Milford all to yourself appeared first on Young Adventuress.